Posted on February 18, 2016 by dkatiepowellart

Our studio sits in the NW Industrial Sanctuary.  When most think of a sanctuary they think of preserving bird and wildlife habitats, but there are other kinds of sanctuaries. 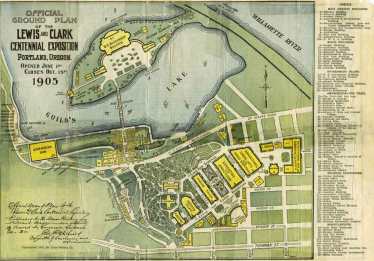 Once this was a gorgeous waterway and lake , used for the Lewis and Clark Centennial Exhibition of 1905.  My drawing was created using postcards and photographs as reference from the era, but admittedly is fictitious — it is how I imagine it looked, had we been in our
studio in 1905 — roughly where the Pennsylvania Building sat!

How lovely to have THAT view out our studio window,
where I sit while writing this blog!

But they demolished Guild Lake,
filled it in, and for some unknown
reason demolished the lovely buildings,
which could have been re-purposed,
such as the cluster of government
buildings, shown left.  I frankly don’t
care what has been written about why, people
demolishing great buildings in their prime
is forever going to be a mystery to me.

I mean, LOOK at that lovely building
complex sitting in Guild Lake!

Now when I look out my window I see this view, of Cal-bag and Grimm studios and a police building and Powell’s book shipping building and countless small artists and manufacturers and people like us, who want to create within the city, near where they live.

I also see far away, all the way to the St. Johns bridge, to the University across the Willamette, to the shipyards, and the hills covered with trees leading to Scappoose.
I see the storms roll in while we work, and feel the pulse of the part of the city that
makes things — and there are two, and both are in danger of being torn down.

This brings us to the NW Industrial Sanctuary.

The NW Industrial Sanctuary was created to preserve the context of a small city by creating an area which could only be used for industrial use.
Industry within city limits used to be the norm, instead of relegating it to another city or district way outside the city boundaries which creates yet another sprawling suburb with clogged freeways bringing hardworking designers, small manufacturers, artists,
and movie studio folks driving hours to the outskirts of town to work.

Besides, industrial areas are interesting areas, telling the story of the
people who came before.  Our industrial area is still open, where the sky is seen
above not through stacks of high-rise apartments and office buildings. 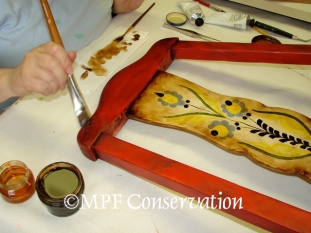 The buildings are vintage. Ours has a colorful history, because we were the distributing station for Montgomery Ward, whose headquarters is a block away, where the story of Rudolph the Red-nosed Reindeer was born.  Horse-drawn trucks drove through the building and were loaded with boxes heading out to their destinations. The beams in this building are gigantic red cedar, completely unheard of today. Now the building is home to Portland Opera’s set design, a video man and our studio. Furniture loaded on those trucks comes back to us to be conserved, such as the Mason Monterey A-frame chair, right.

Developers want to turn this area into high-rise apartment buildings, office buildings, and light retail.  We have a place for that in Portland, it is called the Pearl District.  Home of half-million dollar apartments and condos, high-end stores, it is our little NYC.  I miss the old Pearl, the lovely warehouse district which was home to some of the most beautiful old warehouse buildings anywhere.  Few were kept, and none of the context or history was preserved.  There was no requirement for parks to be created, or vistas of the river for people, though if you stand in the street there are still views of openness to be had.  People need openness for a place to feel habitable.  Imagine NYC without Central Park.  I shudder.  I don’t want the NW Industrial area to become Pearl II, above. 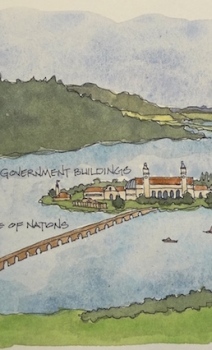 Is this the progress you want for our city?

GOOD planners create livable plans for the city of many types of inhabitants,
not just the 1%.  They create infrastructure so people can get around, take the bus,
walk to the market.  The create parks so kids can play outside, people can walk their dogs, have a game of catch, sit in the sunshine and read, or just have a sense of the earth.
The Pearl is a mini NYC without many open spaces at all.  The planners have not required the developers add amenities for the privilege of building in the area, like the planners in Santa Monica did for developers who wanted to build on waterfront property.
This makes the Pearl a place of slammed-in high-rises.  If planners have knowledge of planning history, they create cities that are integrated and livable.  Green cities mean everyone doesn’t have to sit on the freeway for 2-3 hours to go back and forth to work.  Clean industry in a city is good for everyone.  I am afraid Portland is going to create a city for the 1%, with the stupid suburbia sprawl you see everywhere in the USA on all sides.

I want them to keep the NW Industrial Sanctuary intact.
Let them fill in every single bit of the Pearl (already a lost cause in so many ways)
with their (mostly) so-so or downright ugly and unimpressive buildings.
Don’t get me wrong — I love beautiful buildings, and am a fan of good modern architecture.  I just don’t see much of it being built by the developers in Portland.
I see the same ugly variation of the same building over and over,
buildings I cringe at each time I see them.