This is a series for
Restore Oregon Endangered Places 2016,
now on one page.

Restore Oregon is a cause I can support.
Drawing old buildings is always fun for me,
as I began life as an architect.
Restoration is my passion, though we
practice it as object conservators
(and also in buildings for interior
applications such as upholstered walls,
draperies, shellacked walls and staircases).
I believe in saving the buildings on
the Endangered Places list,
and others that didn’t make it to that list!

Last night was the 2016 DeMuro Award
dinner, and all my images sold…
My babies flew to happy buyers and it also raised money for Restore Oregon.
I am placing all the images with
their prospective pages here.

I started with an image that was most difficult for me in that the subject matter
— a cabin in the woods, Upper Sandy Guard Station — which is not my usual colorful fare.  In it, I talk about getting started on a goal with a deadline, and later,
in another post, I talk about how to connect with subject that picks you
(OR, how to work on commission). 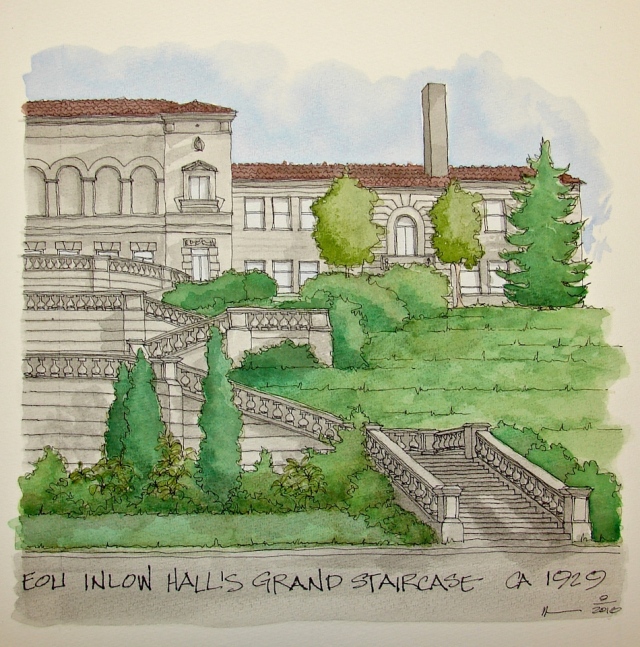 (A few items are still for sale, unframed, below) 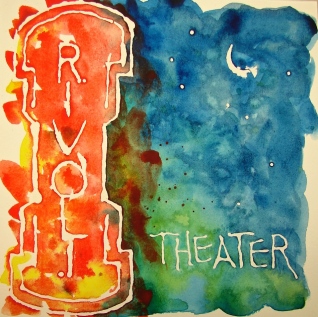 It was a pleasure to be involved, and I have a few more ideas up my sleeve for next year!

Thanks to photographers Drew Nasto and Craig Powell,
and for the various locations for allowing me to use historic images to place
into sketch format to commemorate the projects!

I hope to have time to create many of
Oregon’s Most Endangered Places for 2016.

I started with the following locations:
the Rivoli Theater; the Jantzen Beach Carousel; the Wong Laundry Building;
the Chateau at the Oregon Caves NM; and the Fort Rock Homestead Museum.
I used the images above, some of my own, and took great liberties with imagination.

The design issue is how to layout the images so that they flow
but hold prominence on their own.  That challenge is fun for me! 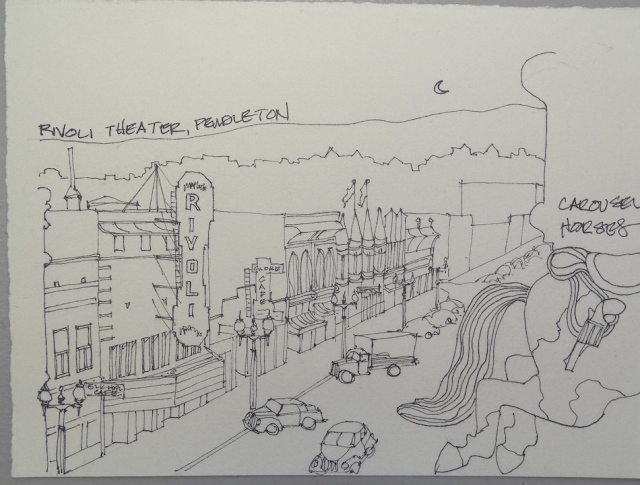 The Rivoli Theater was built as a brick commercial storefront in 1900.
It opened as a theater in 1922, and became an important gathering and entertainment center in downtown Pendleton. Vaudeville and silent movies and talking Hollywood films played into the 1940s. Television’s popularity in the 1950’s took a toll on the Rivoli, but there are now plans to turn it into a cultural center once again.

The Jantzen Beach Carousel was built by the Charles Wallace Parker Company in Leavenworth, Kansas, in 1921. C.W. Parker, the “American Amusement King,” built only three or four carousels the size of the Jantzen Beach Carousel.  It lived for a short time in California before moving to the amusement park built by the swimsuit family in 1927.
The horses are spectacular, and many were hand-carved by inmates of the Leavenworth Penitentiary. The amusement park’s popularity peaked during the 1940s, and it was largely dismantled, but the merry-go-round was in use until recently.  Portlanders have fond memories of the carousels, and when posting updates to friends, many remember riding the horses or have memories of their parents talking about trips to visit the horses on the merry-go-round.  The Merry-Go-Round is no longer present on site.
Restore Oregon working with local partners to find strategy to restore and relocate. 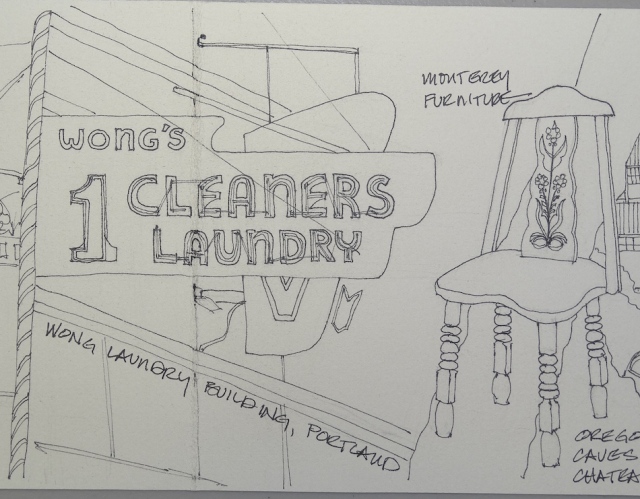 The Wong Laundry Building, located at 239 N.W. Third Ave, Portland,
was built in 1908 by Alexander Ewart.  It is symbolic of immigrant struggles and work ethic in Portland’s Chinatown and Nihonmachi, or Japan-town.  Vacant and water-damaged since a fire in 1970, members of the community hope to restore it as a combined commercial space, event space, and interactive museum.

The six-story Chateau at the Oregon Caves NM was built in 1934.
It has been featured in the Great Lodges of the National Parks, and is part of a larger development that includes a chalet, several employee and rental cottages, and a visitor’s center, all under consideration for National Register status as part of a district.
The buildings were all constructed between 1923 and 1941.  The Chateau is the most outstanding of these structures.  The building also holds one of the largest collections of Mason Monterey furniture, also in need of expert conservation.

Inked sketches on a handmade Arches Journal with a Platinum Carbon pen.

Photographic images (if known and not historic)
by photographers Drew Nasto and Craig Powell.

Thanks to Drew Nasto and Craig Powell, and for the various locations for allowing me to use historic images to place into sketch format to commemorate the projects!

This post shows the changes adding color to the folding journal.
I’ve always been a fan of line sketching, but the color adds a lot to this series.

The following locations are shown in this set:
the Rivoli Theater; the Jantzen Beach Carousel; the Wong Laundry Building;
the Chateau at the Oregon Caves NM; and the Fort Rock Homestead Museum. 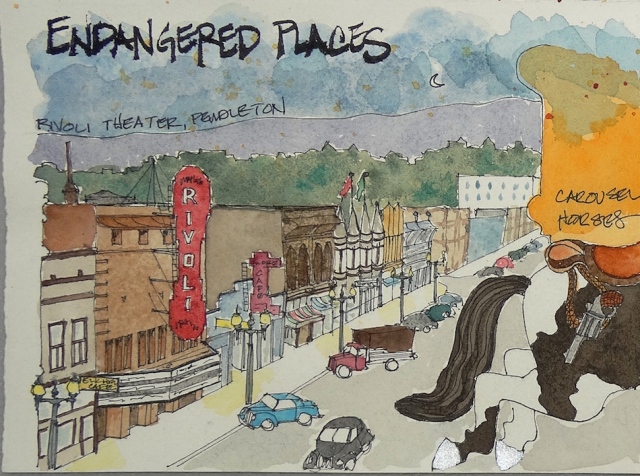 The Rivoli Theater images were mostly in black+white or sepia tones; I had to play with color and use the teeny color images as reference!  The photograph used was taken possibly over a roof line, and the edges of signs were my stopping point, and they played well into the edge of
the horses tail and feet.

The Jantzen Beach Carousel was invented from many images, both  historical
and recent coverage in newspapers and blog posts.
So many photographs have been taken of the exterior horses.
Still, I had no images showing the colors on the outside of the carousel.
I chose to draw the horse I would want to ride!
I hope to do so someday — I love merry-go-rounds!

The Wong Laundry Building was
also a guess in colors.

I looked to the current buildings
in Chinatown for clues, finding many
deep greens, golden yellows and reds
on buildings — the colors of prosperity!

I focused on the old neon sign,
which is much more compelling
than the run-down facade which is
the reality of the building today.

MPF Conservation has a long history with
the Chateau at the Oregon Caves NM.
Having treated thirty pieces of Mason Monterey furniture and having lived nearby for
many years, we know and love the Chateau.
The image of the decks (destroyed by
snow loads) was a black and white historical
photo, and I laid color in as we know it.

The A-frame chair shown is the one historic A-frame with original paint
which survived the flood of 1964, probably
because a guest had taken it from the dining room to their bedroom.  MPF Conservation used the lovely A-frame
as the model for the design of the stripped broken
A-frames, and did diligence to determine the colors
used on the others.  MPFC repaired the original, and
it is now part of the museum collection.
I used the chair to balance the horse in the layout.

The Fort Rock Homestead Museum. derives from
Craig Powell’s image.  It shows the historic
General Store, moved to be part of the Fort Rock village.

In all, I think if I am to do more of these, the paper needs to change.  This is good watercolor paper, and the format is small, only 5-inches high.   It is so absorbent it doesn’t always take what I am throwing at it, especially my mix of inks and watercolors.  This causes bleed even when perfectly dry between layers, so when a stroke should be tiny and clear it wobbles (bleeds) into the next image.