I drive by these painted ladies several times a week, always thinking I should give them a go.  The complicated details and the colors were a challenge for me to do loosely and not too “architectural.”   I wanted them to look like a watercolor, not a building drawing. 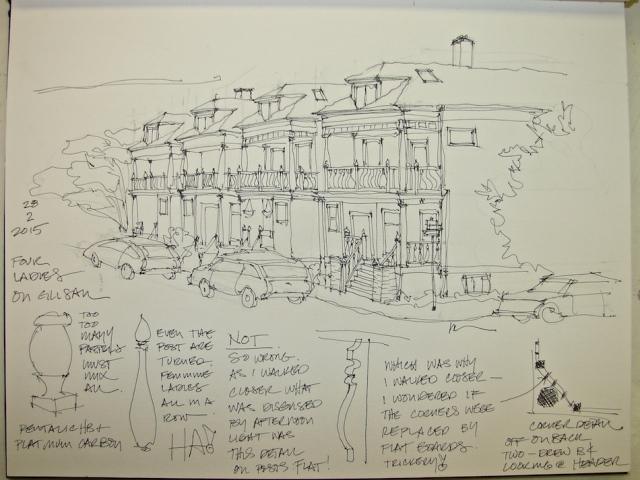 I stationed myself across the street.  I started with guidelines in pencil, and let go of a
two point perspective and let it be as if all the buildings were eye level as they go back.
If you enlarge the drawing you can see that I drew quite a few guidelines before
I began inking.  I was concerned primarily with giving a place for the details of the
houses to sit, and this lack of paying attention got me into a bit of trouble, below.

I admit I assumed that all the
houses were the same except in color.
A LESSON IN LOOKING.  They are of two flipped designs, which I saw clearly as I began drawing details but too late.
(See a detail from Google maps.)
Next time!  And there will be a
next time, soon, because these houses
have everything that challenges
me: complicated detail,
variables, even the Easter colors!

Another surprise which I caught while drawing the details was the bannister posts.
Due to the sun and shadows at first they appeared to be turned posts, which I made note of above.  However, as I was drawing the first corners with the columns behind the angled bannister, I noticed that the posts may have been replaced, as they were not turned.
Then as I went a bit further I noticed they appeared board-flat on all the corners.  I walked over to look closely.  What appeared turned posts from afar were actually posts cut on one side only to give the illusion of turned posts, below — a cost-saving measure, I am sure.

I mostly inked on site, then added watercolor in the studio.  I had to mix many colors.

I’ve been asked about adding watercolors to a good drawing and “ruining” it —
but this is my interest.  I can draw in several styles, and from any perspective:
worm’s eye, bird’s eye, exploding axonometrics, you name it!
I was the go-to girl in the office for complicated inked drawings!  However, I am interested in learning watercolors, and so I do “ruin” the occasional drawing.  This one is a bit blotchy, and as I am finding styles and trying not to paint like a coloring book I also had to choose when to let white paper show, and in both of these cases I was not always spot on.  I have learned not to try to go back in and correct — I’ll do this again sometime soon!
Still I like it and see that I’ve come rather far in this year of practice!