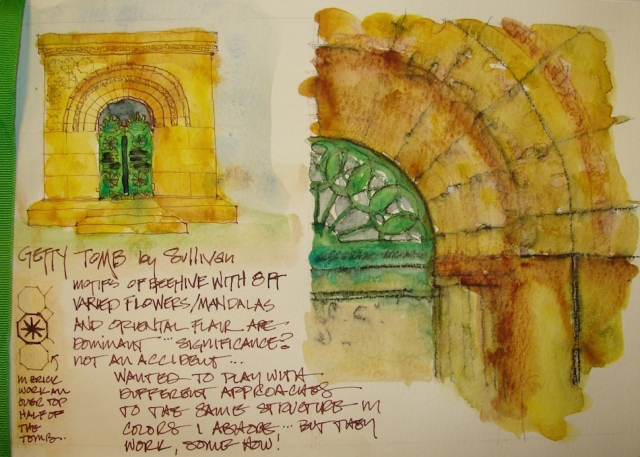 Thanks to a tour of Chicago + Louis Sullivan, I found the Getty Tomb in Graceland
(which the name always makes me think of Elvis, of course.)
I couldn’t get the Getty Tomb out of my head.
Best to get it on paper.
The colors are pretty garish, but they somehow work.  Isn’t that the way with color?
The doors were originally bronze; they say they are patinated, but they almost look painted…  and so often people do paint bronze.  No idea.
I think these mausoleum doors should be entered in the Thursday Doors, a first for me.
(check it out, Norm’s amazing doors.  There are others, and you can follow them!) 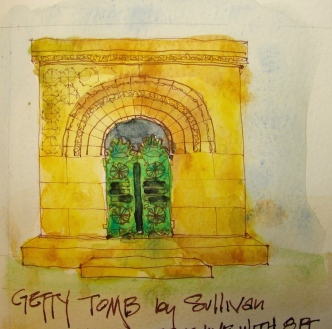 I use my sketchbooks to play with techniques and ideas.
I still am far from where I want to be in my watercolor abilities;
I am not concerned about my ability to draw should I put my mind to it.
(Someday I will show drawings from my portfolio.) 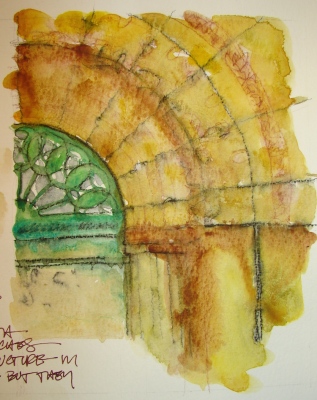 I enjoyed playing a bit with drawing without linework (how else do I wean myself from detail?) and so sketched loosely then went in with color.  I love the second image.
I want to find a way to combine the two techniques but when I start linework
I tend to get into the drawing groove… So perhaps for a bit no lines!

I wonder why the oriental theme, the mandalas, the starburst and beehives embedded into the concrete on the upper half of the structure.  Wiki doesn’t cover my questions, and I may have to go back into Architectural books (storage) to see if it is mentioned.
The Getty family in California was quite flamboyant — thinking of the Getty Museum in the Villa in the Palisades.  I’ve tried to find out about the family, if they two were
related in a quick search, but no luck.  Will keep digging.

I could write this all out, or lift Wikipedia’s writing, which is adequate to the task:

“The [Carrie Eliza] Getty Tomb has been said to be the most significant piece of architecture in Graceland cemetery and the beginning of Sullivan’s involvement in the architectural style known as the Chicago School.”
(I had no idea.)
“The tomb… is composed of limestone masonry construction. Roughly a cube in shape, the bottom half of the tomb is composed of large, smooth limestone blocks. The upper half is composed of a rectangular pattern of octagons, each containing an eight-pointed starburst design.  The cornice is banded with smooth limestone above intricate spiraling patterns below, and the top-edge of the roofline is straight and horizontal on the front and back and scalloped in a concave fashion on the sides.  When approaching the tomb, the obvious focus is the ornate doorway.  An intricately ornamented bronze gate and door, patinated green over time,  are spanned by a broad semi-circular archway. The voussoirs, emanating radially in long thin wedges, share alternating plain and intricately carved concentric bands. The twin gates as well as the door behind share a combination of geometric and floral details that incorporate the starburst seen in the upper patterned walls. The three other sides of the tomb house semi-circular, bronze-clad
windows that mimick the arch and door details of the front. “ 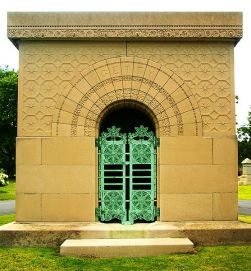 I know I rarely show the photos I worked from, but these are exceptional photos
by David Gleason; I appreciate his allowing them to be used, from… Wikipedia.

I’ve made a temporary square for the Thursday Doors to tell people about it.
It is NOT authorized by the creator of the challenge, Norm.
I’ll work on a better one…  Then ask him if he wants it.

I started a Facebook group page (you must join to view) to allow everyone to share their virtual sketches, and also where we will, from time to time, take virtual sketch walks together.  Come join us On Facebook if you are inclined!
If you want to know more about what a virtual sketchwalk is review my first post.
I also created an accompanying Flickr group!