Sketching Memories of Our Staycation, 9 Kamala

Posted on November 24, 2015 by dkatiepowellart 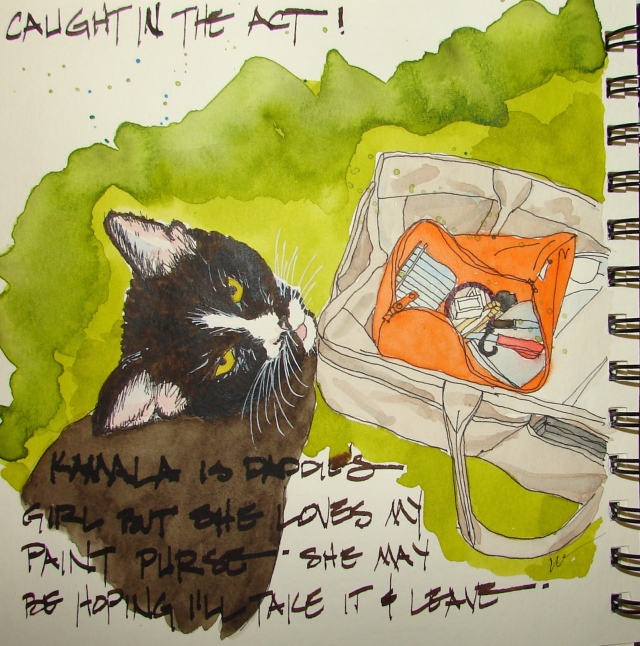 Kamala is her daddy’s girl.  She’d like to see me gone, and makes that known.
She also has a huge fascination with my sketch bag,
and sticks her head in it whenever she can.

I’m not happy with the overall image, but here it is.  I wish I’d made her body darker.
I’m happy with her face, as I captured her in both stance and appearance.

On the other hand, Kamala is so difficult a subject, black (not really brown) on black with white, a fat pampered tuxedo cat.  And suspicious, of cameras and paint brushes.
Or maybe it is anything having to do with me.

See, the thing is, that we moved into a rental many years ago.
after a year of traveling, and one of our cats had not had all their shots yet.
Summer, he was sitting at the screen door calling to her.
(BTW, they hate each other now and we frequently remind him he called her to us.)
I LOVE animals, and simply stepped out onto the deck to tell her she had to go home, using my had to say,

I had no idea, especially as she was a fatty then,
that she had been dumped by the previous renters.
(People who dump animals in the country are second
only to those that actually physically abuse.)
When we found out (talking to new neighbors) she had made her decision.

I was simply too scary.

For several years we made sure she had fresh water and in the winter we put food up way high in the carport (hoping the raccoons would not get it) near a cozy bed.
In summer we watched her be the best mouser ever.
We were getting ready to move, coming up and down looking for places in Portland,
and I often told her we were moving
(of course I had no idea of she heard me because she would not show her face to me.)
One day Mitchell walked out on the deck and she jumped into his arms.

And now she is ours.  Well, his.  It took another year before she would warm to me.  Gads never cross a smart feline female.  I love her as I can, when I can!

4 Responses to Sketching Memories of Our Staycation, 9 Kamala